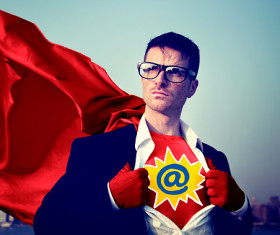 Yup, this is another blog about Social Media and Information Technology. But it is not for the marketing folks. This one is for the IT pros who manage the infrastructure to keep the apps online, the packets moving over the network, and the information safe and secure.

What if you could use Social Media as a means to manage your infrastructure technology? Outside of the fact that it would be cool to get tweets from your VMAX, would it solve a problem? Many admins we talked to believe it can.

Social Media is increasingly becoming the primary way people collaborate and share information. Next time you travel or after your flight lands, look at the first thing people do when they can reconnect to the grid. Everyone is trying to solve the same problem. They each need to reconnect with people and update their statuses as “arrived”. But they go about it in different ways. It’s also interesting that the preferred communication methods fall into each person’s generation classification.

Baby Boomers often take out their flip phones and check voice mail and make calls. Generation Xmembers take out their devices and check emails and texts.  Millennials, on the other hand, usually check with their social groups when they reconnect.  They use Facebook, Twitter, SnapChat, etc. to let everyone know they landed and check in to see what they missed. Often, social media is their primary source for news and information. It’s not surprising since many have never watched a nightly newscast or unfolded the daily newspaper. 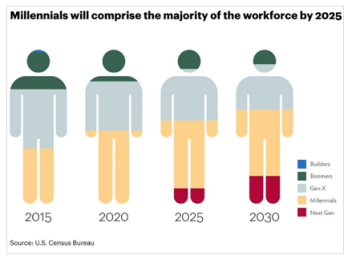 Given that Millennials represent the fastest growing segment of those joining the ranks of IT, it’s clear they are also beginning to impact how we interact with technology. Imagine the possibility that within a decade using email and PowerPoint to communicate could be headed to the same fate as the nightly news and the morning paper. The need to communicate with others does not change, but the preferred method of how we interact and collaborate will. How can using Social Media improve the way we manage technology? With the shift to cloud, managing infrastructure is becoming more abstracted and automated.  The set of knobs and dials used to manage systems are disappearing. Managing infrastructure is becoming more and more automated similar to flying an airplane. In today’s advanced aircrafts, technically, the pilot no longer flies the plane. The plane flies the pilot. In fact, newer aircraft such as drones, no longer require the pilot. It’s mostly all automated.

In a steady state, if systems can self-provision, self-tune, self-automate, and self-heal, what’s left to do other than to report status and what’s changed? Using Social Media, why couldn’t it be as simple as the system posting a heat map selfie and Facebook status update? It sounds cool, but is this how technology could or even should be managed in the future? The answer and feedback from admins may surprise you, and they are not all Millennials.

The experiment accidentally started with Stan. @StantheVMAX is a lab system shared by development teams to conduct some “off the radar” PoC’s and test plans. Since the system is shared, it’s necessary to notify users when changes were made, tests were completed, and when something was broken.

The idea of having Stan tweet the updates started as a sarcastic engineering remark on how to let everyone know what was going on. After some trial and error, code was running that allowed us to scrape the audit logs, and automatically generate notifications via Twitter. Within the engineering teams, we all thought it was pretty cool.  As word got out, Stan began to amass a pretty large group of followers, and many were outside of the team of engineers using the system.

But the “ah-ha” moment happened when we would run demo’s for users, and they would say, “wait a minute, did it just send a Tweet”? The conversation would quickly shift from <redacted> feature, to what type of status and change alerts admins would like to receive a notification about. The discussion would then include a set of requirements around what would be useful if the system could tweet.  It often included high level notification of status changes and advanced warnings.

The lesson learned is using Social Media to interact with technology for many admins can help address a pain point. If you’re interested in having your system send alerts via twitter, the scripts and “how to” documentation are posted on the EMC {code} GitHub page. Give it a try and let us know what you think.

While we collect additional feedback, Stan will continue to Tweet. Feel free to follow him on Twitter@StantheVMAX.