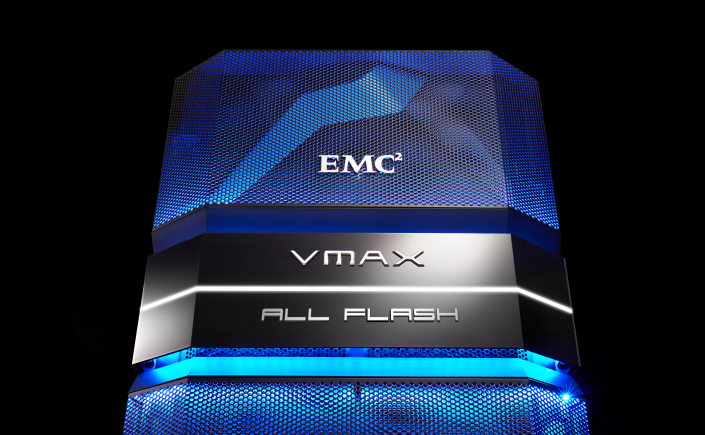 Flash adoption continues to accelerate as organizations look to modernize their data centers. At the heart of this new modern data center is VMAX All Flash, specifically engineered to drive IT’s transformation into this new era. By delivering higher performance, predictable latency, increased density, reduced power and cooling, and improved customer experience, it’s pretty clear why users are excited for the newest revolution of VMAX. 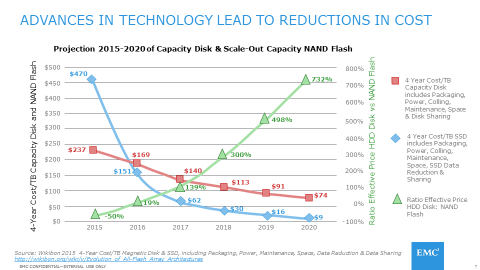 The introduction of high capacity SSD’s now delivers these technology benefits with an improved overall TCO that’s hard to ignore. The results are attractive economics that will quickly have users moving to deploy VMAX All Flash systems going forward.

The new VMAX All Flash provides a proven platform to optimize Flash Drive technologies. The system’s architecture delivers gigantic scale allowing users to consolidate tens of thousands of workloads to drive massive levels of consolidation and efficiency. Multicore CPU’s drive high IOPS and massive front and back end bandwidth move large data sets, allowing performance hungry apps to take advantage of flash technology. VMAX All Flash Hypermax OS has been “Flash-tuned”. The result is an average response time of under 500 microseconds (#PunchIt) for a transactional workload such as a database with a typical mix or read/writes, block sizes, and cache hits. This translates into more transactions and faster queries to satisfy demanding business workloads.

There’s also some really cool “secret sauce” developed in the code to support high capacity flash drives. The large global cache services the majority of IO from cache versus back end flash drive. All writes are serviced from cache to reduce the cell wear and extend the useful life of the flash drive.

But there’s also a unique “write folding” operation that helps avoids unnecessary disk IO’s when hosts re-write an address range. It allows all writes to be cached so as apps write and rewrite the same data (such as a database updates and logs), the amount of writes sent to the backend flash drives are minimized, further reducing cell wear. In a typical VMAX app environment, 30-50% writes can be rewrites.

In addition, intelligent “write coalescing” helps out big by merging subsequent host writes to the same addresses from different times into 1 large write. Not only does is make writes to Flash more efficient, it also helps minimize the number of IO’s required to read and write RAID parity protection. The end result is data written to Flash in chunks 2 to 5 times the size of the average host IO’s, providing a huge reduction in overall backend IO and drive wear.

VMAX All Flash also includes advanced drive wear analytics optimized for high capacity SSD’s to make sure writes are distributed across the entire flash pool to balance the load and avoid burring out individual drives. Not only does it help manage the SSD’s in the storage pools, it makes it easy to add and rebalance additional storage into the system.

The new Unisphere gets “All Flash-ified” as well. Service levels are simplified to all <1ms response time by either choosing “Diamond” or “Optimized.” Diamond applies a performance target and uses workload planner to measure front end, back end, cache, and remote links to advise if new apps will fit. Optimize allows apps to be balanced across remaining resources that do not require a performance target, to provide “Good”, such as test/dev and inactive apps.

Another key capability of the VMAX All Flash is the new packaging and licensing models.  Simplified modular building block configuration and appliance based software packaging remove the friction and complexity to make it easier for users to consume the capacity, performance, and high end data services.

In a nut shell, users can start small with a single V-Brick that includes the software. V-brick and drive upgrades are prepacked to simplify ordering and budgeting. For flexibility, capacity upgrades on new V-bricks are not required to be identical to the existing V-bricks, meaning capacity adds can be more granular to better fit a user’s requirement. In addition, having a single flash tier to manage also makes sizing for different workloads with a range of IO skews (what % of data generating is what % of IO) simple, since the entire workload runs on all flash.

The VMAX All Flash can get big (really BIG) by easily adding capacity for growth without having to deal with capacity based software licensing charges. This makes it easy for users to consume the replication, management, and app integrations data services, maximizing the value of their storage.  From there scale out V-bricks to add performance, connectivity, and throughput. This allows both capacity and performance to be scaled independently.

Where’s the Beef…What About Data Services?

One of the key data services of VMAX All Flash is SRDF (Symmetrix Remote Data Facility). With 20+ years of engineering innovation and proven global distances of over 12,000 kilometers, it supports the world’s most mission critical applications at scale. Fun Fact, SRDF has the industry’s high attach rate for replication with a 70% penetration rate. So most users don’t buy VMAX. They buy SRDF and run it on VMAX. Big change here is the super simplification. For example, configuring SRDF Metro takes less than 2 minutes.

Another key VMAX All Flash Data service is local snapshot replication.  SnapVX is new snapshot technology designed specifically for performance and scale. Up to 64,000 devices can have 256 snaps each, allowing the system to support 16 million snaps. We have seen examples of snapshots under extreme IO loads can be created and mounted with nearly undetectable performance impact. The space savings for making snaps is comparable to arrays that dedupe by user pointer based copies to eliminate the need for full copies to support test, dev, training, etc… And app awareness via Appsync make copy data management the killer replication tool for DBAs who want to create and manage their own copies.

The road map for later this year includes inline compression and provides the best space savings “bang for the buck” for typical VMAX workloads such as DB’s and transactional systems. It supports all data services including encryption and replication. For highly compressible data sets, it provides higher utilization of Flash capacity and reduces the cost per usable TB, all without compromising functionality.

And migrating to VMAX All Flash gets super easy and transparent. Support for non-disruptive migrations all managed via Unisphere will help accelerate tech refreshes of older VMAX systems by eliminating the “friction” of having to migrate apps to a new systems without requiring down time or having to involve the app and server admins. The storage admin simply picks the LUNs to migrate, copies the data and device presentation, enables the new channels, and removes the old device, DONE!

This year will be a big year for data center modernization initiatives, and at the center of many is VMAX. Engineered to support the densest Flash possible, VMAX All Flash now allows users to leverage the efficiencies and benefits of all flash systems without having to compromise the capabilities and value that high end systems deliver to support their mission critical apps at scale.

Buckle up, folks, and get ready to #FlashForward.