It was 10 years ago when we lost John Howard, a truly great person and legendary EMC team member. Many of us who worked with John have moved on to different roles, and still talk about him even today. Many more who never knew him, have heard his name as a result of the John Howard Common Sense award given out annually at EMC, so his memory and spirit lives on. Several of us pulled this together when the award was first started, and I thought I would post it again for newer folks. 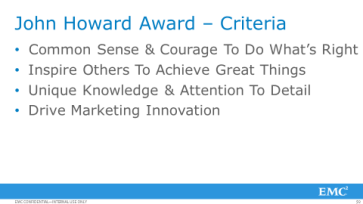 One thing you can say about John Howard is that he was truly passionate about his job, his associates, and EMC.  He had a great ability to inspire every one he worked with to make the final work product better.

His philosophy was that regardless of how complex a particular issue was, you can always find a way to describe it in terms that are clear, concise, memorable, and technically accurate.  And every day of John’s career at EMC he would fight, (sometimes literally) to make that happen.  This is what made John a leader, and everyone at EMC respected him for this.

Although John had a passion for his job there was never any doubt about what his top priority was.  It was his family.  One of the greatest things about John was listening to him talk about his family.  In fact, it is safe to say that anyone who knew John knew his family as well, even if you may have never actually met them.  It didn’t matter whether John was talking about EMC to a customer or about his family to his friends; the story was always clear, usually concise, very compelling, and mostly accurate…

John will always be remembered for his laugh, his sarcasm, his stories, his car analogies and his Dilbert cartoons. His quick wit would always help lighten a tough situation and he was famous for his timing and delivery of “one-liners”.  Some of his favorite lines included , “At EMC we only work half days…once you have put in 12 hours its time to go home,” … “Cheap shot…direct hit,”… and “Leave the sarcasm to the professionals”

John created a document that he would always hang on his office wall, called “Howard’s Laws”.  He started the list in 1989 and includes a lot of wisdom he picked up over his 26 years in the business.  Every bit of it still applies today, which is why I hang it on my wall.